Levvel’s DevOps Team recently attended training at Ansible’s Headquarters in Durham, NC. Ansible is one of the top contenders in the IT Automation space and with its recent acquisition by RedHat, the Ansible team has made significant inroads into the Enterprise.

In 2012 the tech world was introduced to Ansible, a free and open-source software that is predominately used for IT Automation, Configuration Management, Software Deployments, and even ad-hoc command execution on remote systems.

Ansible works by connecting to remote hosts via SSH and executes commands on those systems. The initial appeal of Ansible is its agentless structure, unlike other configuration management tools that require some sort of agent or service/daemon to be running on remote hosts in order to use it.

Today we’ll learn a little about Ansible as a powerful configuration management and automation tool that can effortlessly manage thousands of remote hosts. We’ll also will shed some light on Ansible Tower a visual dashboard that centralizes your infrastructure and has lots of Enterprise-ready features. We’ll top it off with a look into Docker integration with Ansible and how Ansible can be used to manage a Dockerized infrastructure.

The playbook is the design plan that you will enforce on the remote host and is the configuration file that contains the tasks to be executed using Ansible’s modules.

Playbooks can declare configurations, but they can also orchestrate steps of any manually ordered process. It’s designed to be easily human-readable and viewed as an ordered lists of tasks that you can execute on remote hosts.

The following is an example of playbook that runs on all remote hosts designated as a webservers, installs Nginx and starts the service:

This is considered a play, which runs on hosts designated as webservers defined in an inventory file. This play executes two tasks using two different modules: (apt) and (service).

To run this simple playbook, you can use the

command and define the webservers hosts in the inventory file like this:

The recap of this playbook show us that that two tasks are in state changed which indicates that two changes are made on the remote hosts (installing Nginx and starting the service), if we try to execute the playbook again we see Configuration Management idempotency in action:

The “ok” indicates that the change you want to enforce on the remote host already exists and there is no need to repeat the process.

With Ansible Tower, you can centralize and control your Ansible infrastructure with a visual dashboard, role-based access control, job scheduling, and graphical inventory management. Tower’s REST API and CLI make it easy to embed Tower into existing tools and processes.

Tower supports other great features too, like push button deployment where users can run a playbook with just one click remote execution command features for ad-hoc commands and real-time output of audit and compliance reports. Try it for free

Ansible Tower offers a free license to manage up to 10 nodes.

The server should be at least 2 GB RAM with 20 GB dedicated space on the disk for the installation and managing jobs.

There are different scenarios for Ansible Tower installation but in this example we’ll use a simple setup.

The installation archive is itself an Ansible playbook you can run using the $ ./configure script. Use the -l option with the configure script to indicate that you will be installing Ansible on the same local machine:

The script will run a playbook to install Tower and it’s backing services. You’ll now be able to access the Tower web app using the server’s IP address:

Once logged in and registered with a free license, you can start experimenting with Tower.

There are a few key things to keep in mind with Ansible Tower:

Credentials are utilized by Tower for authentication when launching jobs against machines, synchronizing with inventory sources, and importing project content from a version control system.

Tower credentials are imported and stored encrypted in Tower, and are not retrievable in plain text on the command line by any user. Once a password or key has been entered into the Tower interface, it is encrypted and inserted into the Tower database, and cannot be retrieved from Tower. You can grant users and teams the ability to use these credentials, without actually exposing the credential to the user. If you have a user move to a different team or leave the organization, you don’t have to re-key all of your systems just because that credential was available in Tower.

Permissions are general user rights for job templates and inventories, allowing them to run certain playbooks on designated hosts.

There are three types of Tower Users:

Normal User: read and write access is limited to the inventory and projects for which that user has been granted the appropriate rights.

Organization Administrator: the administrator of an organization has all of the rights of a normal user, as well as admin, read, and write permission over the entire organization and all of its inventories and projects, but does not have those levels of access on content belonging to other organizations. This level of user can create and manage users.

Superuser: a Tower Superuser has admin, read, and write permissions over the entire Tower installation. A Superuser is typically a systems administrator responsible for managing Tower and will delegate responsibilities for day-to-day work to various Organization Administrators.

A Project is a logical collection of Ansible playbooks, represented in Tower.

You can manage playbooks and playbook directories by either placing them manually under the Project Base Path on your Tower server, or by placing your playbooks into a source code management (SCM) system supported by Tower, including Git, Subversion, and Mercurial.

A job template is a definition and set of parameters for running an Ansible job. Job templates are useful to execute the same job many times. While the REST API allows executing jobs directly, Tower requires first creating a job template.

A job is an instance of Tower launching an Ansible playbook against an inventory of hosts.

The Jobs link displays a list of jobs and their status–shown as completed successfully or failed, or as an active (running) job.

To integrate Tower with BitBucket, you can open the credentials tab, choose the source control credential type and add private key / username and password combinations that will be used to pull updates from your Git repository: 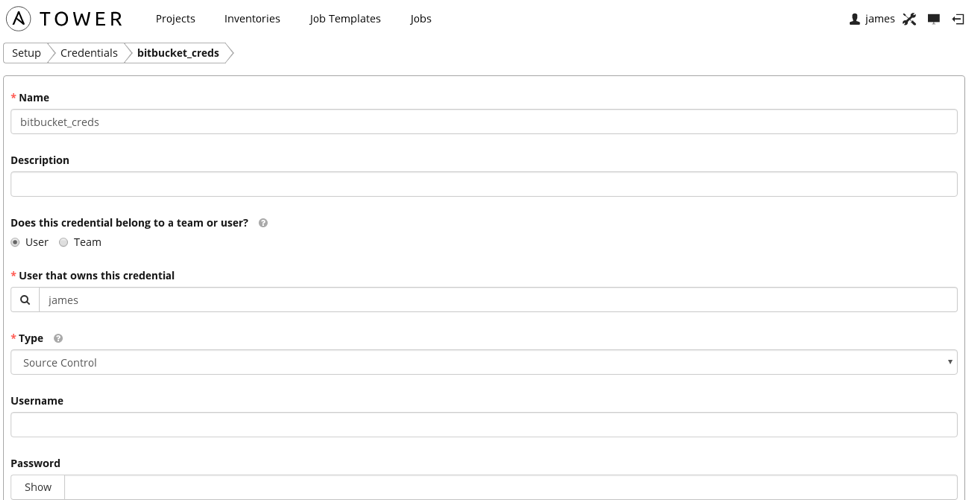 The addition of AWS credentials allows easy provisions and configurations in the cloud.

Then add inventory to sync the hosts from AWS to Ansible Tower. 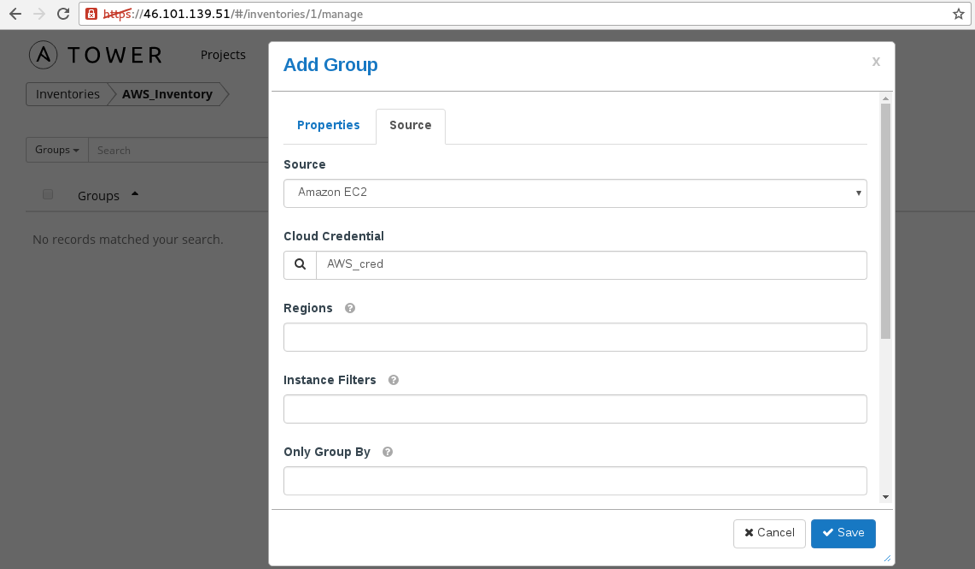 After that we’ll sync our EC2 instances.

You can see that the 10 instances are synced correctly. Now it’s time to add a project and run a playbook:

Next we’ll set up a job template that contain a playbook to install WordPress on the EC2 instances. 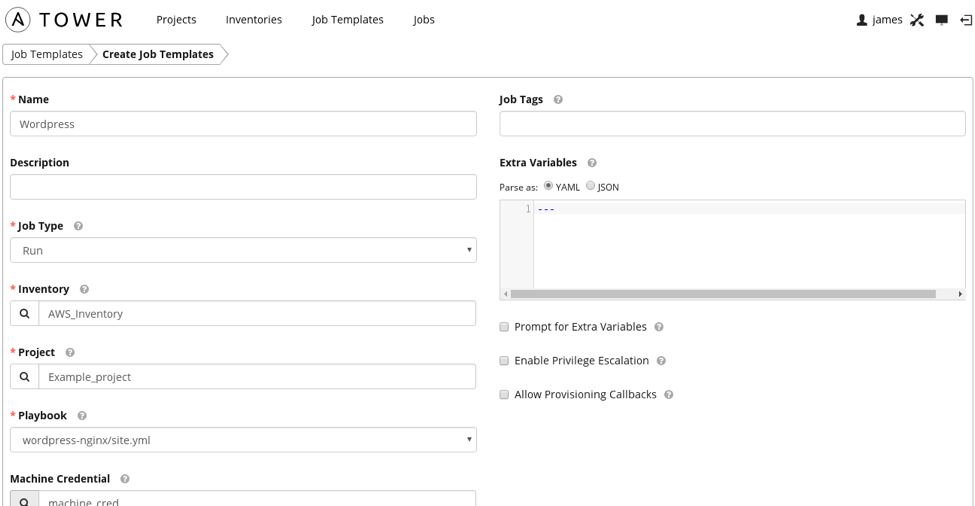 Finally, run the job template and check the output in real time: 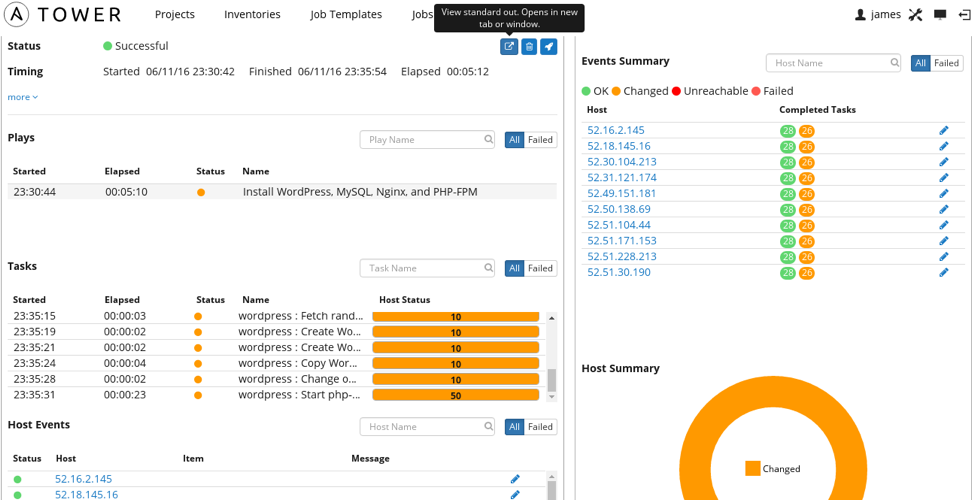 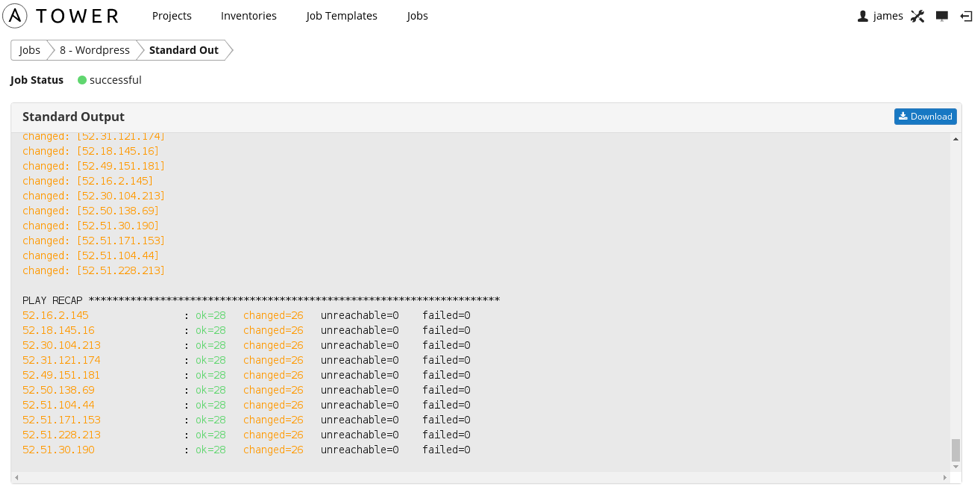 The Docker module in Ansible can manage Docker containers and it can build images from a dockerfile or run images on remote hosts.

** There are a few prerequisites that needs to be installed on the remote hosts, before running the Docker module. For extra credit use an Ansible playbook to install the following.

Ansible is an amazing tool with clear benefits across your entire IT organization and Ansible Tower is the clear choice for managing your Ansible-powered infrastructure.

If your organization is ready to increase velocity with the best automation tool on the market, contact us at Levvel DevOps to get started. Additionally, I’ll be representing Levvel at DockerCon 2016 and would be happy to meet you in person. Drop me an email here.